I calmed my inner fears this morning when I realized that my depleted yarn supply could easily be enhanced with online orders from...Oh, no, Amazon workers are preparing for  STRIKE. This a serious dilemma, folks. The project I'm working at the moment requires specialized yarn. I need six skeins. I have one. If delivery trucks are not delivering, my hands might be idle for a while and we all know what comes of idle hands.

HOLD THE PHONE! Did you know Hobby Lobby is also an online store?!  https://www.hobbylobby.com/

You probably did, being the savvy shopper you are. I did not. Now I am a happy knitter. My hands will be idle no more.

Hobby Lobby CEO David Green is refusing to close stores during the COVID-19 pandemic because his wife, Barbara, received a message from God saying that employees would be kept safe.


Mart Green
This Book Is AliMart Green began his retail career in the home of his parents as a youth. With $600 his family started Hobby Lobby in their living room, which is now a chain of over 900 arts and crafts stores. He is the Ministry Investment Officer for Hobby Lobby and also serves as Board Chair. In 1981, Mart established Mardel, a chain of Christian and educational supply stores. Headquartered in Oklahoma City, Mardel has 36 stores in nine states.

In 2010, Mart began a journey to “Eradicate Bible Poverty". An alliance of ministry and resource partners, called illumiNations was birthed. Their goal is that by 2033, all 6000 plus vital languages will have Scripture in their heart language. It is Mart’s belief that by 2033, 95% of the world will have a complete Bible, 99.96% of the world will have a New Testament, and 100% will have at least 25 chapters.
From January 2008 to April 2014, Mart served as Board Chair of the Board of Trustees at Oral Roberts University and now serves as Trustee Emeritus.
In January 2005, Christian Retailing named Mart Green one of the Top Fifty People who have most shaped and impacted Christian retailing in the last half century. In 2008, he was also awarded the Jim Carlson Christian Bookstore of the Year Award by the Christian Book Association (CBA) for setting standards of excellence in the industry.
In June 2002, visionary Green founded and was Producer/CEO for Every Tribe Entertainment, a feature film production company. Their movie End of the Spear was released to theaters in January 2006. Millions in the U.S. viewed End of the Spear with great impact. The film is still being shown in many countries around the world. Mart also produced a companion documentary called Beyond the Gates of Splendor.
A native Oklahoman, Mart and his wife, Diana, have four married children and eleven grandchildren.

Want to read more about Hobby Lobby and the company's stand on the global pandemic?:


Glad tidings came to me in full force with a confirmation e-mail that my order has been shipped. 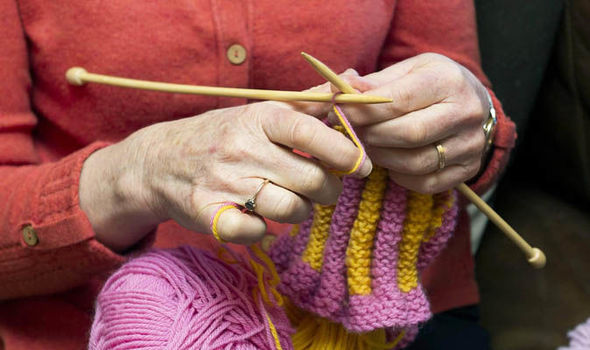 Now, to get the wrapped eyelet stitch conquered. It's a tricky one but time does not appear to be relevant, so I will knit on.


Find something to do during this weird chapter in our earthy life.

Lisa, the lady with the cane

Tuesday, June 11, 2019
I rarely panic where my health is concerned. I mean, what is there left that I haven't experienced thus far living with the MonSter?

But, I had a moment last week and bowed to my inner devil's advocate.

Thank goodness I have an excellent medical cheerleader in my camp. Ericka Blackwell may not be a fully credentialed neurologist, but  her compassion and interest is sincere and vastly more professional than many licensed neurologists I have met on this journey. So, she scheduled  an appointment  and sat patiently with me while we hashed out my current questions regarding my MS.

My biggest concern lately is the fact that my right (foot) toes (big toe and little one beside it) have been curling up painfully on a daily basis, further hampering the annoying foot drop that rules my world. Well, guess what? There is a muscle relaxant called Baclofin that is basically side-effect free that will help me with this.…
Post a Comment
Read more

There is no GPS for MS

Thursday, June 20, 2019
I have always been a rather trusting person. I believe that when someone tells me they are going  to do something in particular, I believe them. Until they renege on their promise; and then  they no long exist to me.I don't mean I hate or thwart them. That person just no longer holds my interest.

The same with 21st century technology. In today's advanced world of communication, it is imperative that we place our  trust in helpful devices like microwaves, electric garage door openers, and this wonderful invention called GPS (Global Positioning System/ Satellite). What a marvelous thing to be able to type in an address and be taken there, step-by-step. We will never be lost again!

If you are frequent reader of Lady with the Cane, you know that my son is starting university this fall. A lover of all things academic, I KNOW I am more excited than he, so while he is off doing summer things Mom is reliving her glory days with visits to his soon-to-be new home and reacquainting h…
Post a Comment
Read more