Once in a cold moon.

The cold moon...pretty awesome...so named because of the time of year and, this year, it's proximity to the winter solstice. Yes, this beautiful gift from nature is happening this Saturday, just in time to welcome the official start of winter.

Native Americans kept track of important responsibilities with the occurrence of season full moon. the Harvest moon in September indicated the time to, yep, you got it...harvest. June's strawberry moon is reflective of the abundance of strawberries at that time on the calendar. The infamous Blue moon happens in the rare situation when there are two full moons in the same month, hence the phrase "once in a blue moon."

But I do not care for the negative connotations of something occurring "once in a blue moon". My son's diagnosis of Miller Fisher Syndrome has taken a huge toll on our family. Not to worry: He is improving daily and (finger's crossed) will return to school after the holidays. Miller Fisher...now, that is certainly a "once in blue moon" event. Talk about a rarity!

Miller Fisher syndrome (MFS) is an uncommon variant of Guillain-Barré syndrome (GBS) characterised by external ophthalmoplegia, ataxia, and areflexia. This syndrome is observed in about 5% of all GBS cases. Miller-Fisher syndrome can be distinguished from GBS by a few clinical features. As the laboratory findings are not specific for MFS, the diagnosis is made only with suspicion of the disease. The aim of this report was to remind the MFS to emergency physicians and to emphasize the differential characteristics and treatment of this neurological emergency. We reported the clinical features of two patients who were diagnosed to have MFS in the emergency department. Emergency physicians should not underestimate the flu like illness together with the typically clinical triad of MFS in the possibility of variant MFS. The first dose IVIG therapy in the ED may be an important factor for early recovery of the patients who have clinically severe findings.
(PDF) The Diagnosis is Made Only with Suspicion: Miller Fisher Syndrome. Available from: https://www.researchgate.net/publication/289271500_The_Diagnosis_is_Made_Only_with_Suspicion_Miller_Fisher_Syndrome

So, basically, my Boone is rare bird. I knew that already, but in a different context.

"Once in a blue moon." We warriors are also a rarity. At one time our symptoms wold have landed us in  a mental facility. "Drawings from autopsies done as early as 1838 clearly show what we now recognize as MS. Then, in 1868, Jean-Martin Charcot, a professor at the University of Paris who has been called “the father of neurology,” carefully examined a young woman with a tremor of a sort he had never seen before. He noted her other neurological problems including slurred speech and abnormal eye movements..."

Think of the wish trials in Salem and some of the indicators that lead the public to believe that these individuals were evil. Duh... Read the complete article here:
https://www.nationalmssociety.org/NationalMSSociety/media/MSNationalFiles/Brochures/Brochure-History-of-Multiple-Sclerosis.pdf

Here in West Virginian,not far from my home, stands the historic Weston State Hospital for the Criminally Insane in Lewis County. This institution housed thousands of diagnosed and undiagnosable  (Don't spell check it..I think I just invented it)individuals for years. Now a popular tourist attraction and ghost chaser venue, The Trans-Allegheny Lunatic Asylum is "home" to the captive spirits at unrest.
WESTON, W.Va. –“Are you ready?” the ghost-tour guide in the cavernous foyer at the Trans-Allegheny Lunatic Asylum addressed my 12-year-old daughter Emma, who was positively effervescing with excitement. Then, he actually said: “It’s been crazy up there today!” 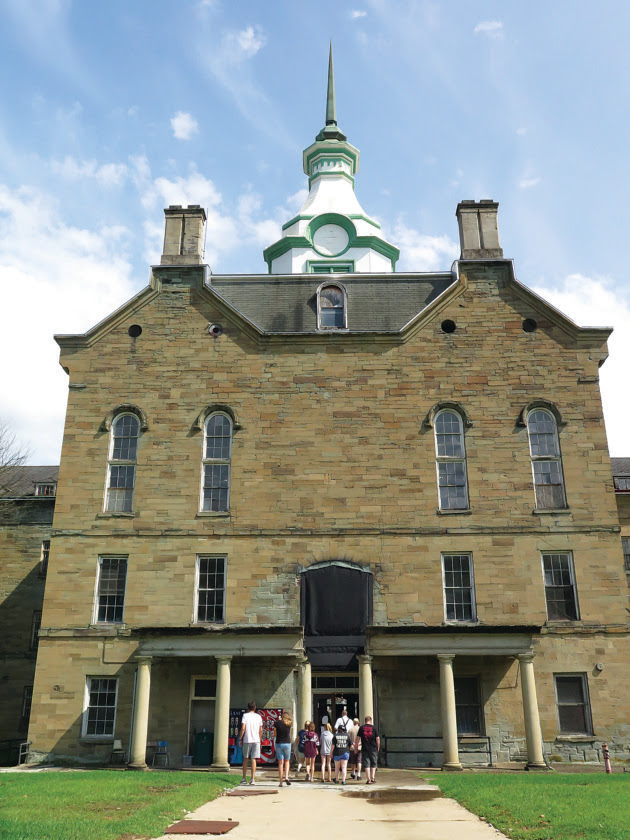 http://www.theintelligencer.net/life/features/2018/10/haunted-hospital-former-w-va-mental-asylum-offers-historical-and-ghost-tours/
I have to question how many of those "inmates" actually suffered from conditions such as multiple sclerosis.
You know as well as I that many of symptoms are often impossible to explain and almost always unpredictable.  We do not plan to suddenly lose all body control and appear to the public a sniveling, irrational, blob of a mess that no one cares to address. Face it...there are times when our condition warrants a lunatic moniker.

We may not be experiencing a blue moon this weekend, but our cold moon is only hours away. For you sky gazers, enjoy the site that will be accompanied by sporadic meteor showers and a full, HUGE moon.

Keep your eyes forward and your feet firmly planted during the holiday. We are special. We are rare. Our existence has a purpose. Merry Christmas,
Lisa

Friday, April 03, 2020
Bored? Are you a couch potato? If you are already prone to this malady, the following information may be dangerous in encouraging this behavior. This writer is not responsible for damages done. As a result of today's blog topic,  my personal couch potato activities are responsible for the lack of yesterday's post. In an attempt to justify my actions, I blame Netflix (in the name of research).  The best way to prove a fact is to test it, right? Yesterday I definitely put Netflix to the test by watching hours of Safe, a one-season Harlon Coben creation that whetted my love for crime/mystery/action-based entertainment. Harlon Coben is an American author whose work I have enjoyed immensely over the years,  discovering Safe as Coben's break out into film became that much sweeter when The Five caught my attention another series of his own. I will finish The Five today (unless some saves me) so that I can
Post a comment
Read more

Monday, October 28, 2019
We warriors are a resilient breed. After speaking extensively with a CBD enthusiast over the weekend, i finally bit the bullet and bought the "good" stuff...all in the name of research. Things have changed a bit since my first CBD experience, including the flavor. This particular product comes in natural (an earthy flavor), peppermint (self-explanatory), and cinnamon (Yum!).Because particular brand (Hempworx) has ONLY two ingredients : CDB and hemp seed oil.   I decided to document my experience here, so if any of you are interested we can discuss our personal journeys. As you all know, MS is an expensive condition that requires careful thought to additional treatments and related expenditures, most of which are not recognized by insurance companies and/or medical professionals; so, every experience is a financial gamble. I started my new "treatment" on Saturday, October 26, 2019. The instructions direct you to take two-three drops under the tongue twice a
8 comments
Read more