Have you ever heard of hug gone wrong?
The MS Hug apparently is well-known to MSers. (Somehow I missed that memo.)

For nearly ten years I suffered from something that was finally diagnosed as a "floating rib". I spent ungodly amounts of money on chiropractic bills, getting the "shrug" from a heart specialist, undergoing medical tests for unrelated issues...blah, blah, blah.

The pressure immediately around my rib cage kept me awake at night. It made driving extremely uncomfortable unless I constantly checked my posture for that military rigidity that allowed my rib cage to align. Imagine my surprise when I discovered (on my own) that this persistent sensation was and is most likely what is known as the MS Hug.

In my book I Have MS. What's Your Super Power?: A Common Sense Guide to Living With MS, I describe the Hug on page 31:

The MS Hug(also known as girdling) is a collaboration of symptoms caused by spasms in the intercoastal region of the body. This is the area between the ribs. The Hug is often described as a squeezing, crushing, ants crawling under the skin, hot or cold burning, pins and needles sensation. 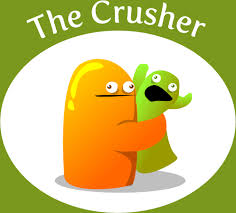 This is not the warm and fuzzy hug that makes all the tears go away.

So, why did (and has) no one in the medical field talked to me about this? Is it another one of those non-existent symptoms (much like my drop foot) that I just need to "deal with"? The vagueness with which multiple sclerosis is  approached just astounds me.

Here are some absolute truths:
MY RIGHT FOOT WILL NOT WORK PROPERLY!

THERE IS AN INVISIBLE BAND HUGGING MY RIB CAGE THAT IS SOMETIMES PAINFUL.

Did I say that loud enough? should I shout it out one more time, or will that earn me another prescription of mood altering drugs because I am OBVIOUSLY UNSTABLE?

Did you know that as recent as the 1950's (yes, as medical history goes, that is recent), individuals experiencing symptoms of what is now labeled multiple sclerosis were actually institutionalized? The weird and undefinable symptoms that these folks exhibited could only be described as weird and unnatural. Hitler probably threw many of these individuals into the gas chambers. May of the supposedly possessed ladies of the Salem Witch Trials probably had MS.

I attended undergrad school at West Virginia Wesleyan in Buckhannon, WV. Located just a few miles down the road was a mental hospital famous for its former hardcore "residents". the facility is no longer a medical facility. It is now a tourist attraction that draws thousands of ghost chasers year round who tour and can even spend the night looking for the spirits of the mentally diseased.

There is no doubt in my mind that many "inmates" incarcerated in what is known now as the Trans-Allegheny Lunatic Asylum suffered from inexplicable physical situations that totally drove the insane. (Okay...is that too far out there?)

People with MS were really treated to such extremes back in "the day". Because the medical professionals couldn't explain it, it must not be a viable physical condition. Let's blame it on the brain.

Of course it's the brain. THE BRAIN CONTROLS EVERYTHING!!! That doesn't mean that we are suffering from a twisted out look on life. It means that our brain is sending a message that something is not right.


Common Sense is not dead, folks, regardless of many reports we have heard on the contrary.


The Obituary of Common Sense Today we mourn the passing of a beloved old friend, Common Sense, who has been with us for many years. No one knows for sure how old he was, since his birth records were long ago lost in bureaucratic red tape. He will be remembered as having cultivated such valuable lessons as: - Knowing when to come in out of the rain; - Why the early bird gets the worm; - Life isn't always fair; - And maybe it was my fault. Common Sense lived by simple, sound financial policies (don't spend more than you can earn) and reliable strategies (adults, not children, are in charge). His health began to deteriorate rapidly when well-intentioned but overbearing regulations were set in place. Reports of a 6-year-old boy charged with sexual harassment for kissing a classmate; teens suspended from school for using mouthwash after lunch; and a teacher fired for reprimanding an unruly student, only worsened his condition. Common Sense lost ground when parents attacked teachers for doing the job that they themselves had failed to do in disciplining their unruly children. It declined even further when schools were required to get parental consent to administer sun lotion or an aspirin to a student, but could not inform parents when a student became pregnant and wanted to have an abortion. Common Sense lost the will to live as the churches became businesses, and criminals received better treatment than their victims. Common Sense took a beating when you couldn't defend yourself from a burglar in your own home and the burglar could sue you for assault. Common Sense finally gave up the will to live, after a woman failed to realize that a steaming cup of coffee was hot. She spilled a little in her lap, and was promptly awarded a huge settlement. Common Sense was preceded in death by his parents, Truth and Trust; by his wife, Discretion; by his daughter, Responsibility; and by his son, Reason. He is survived by his 5 stepbrothers: I Know My Rights, I Want It Now, Someone Else Is To Blame, I'm A Victim, and Pay me for Doing Nothing. Not many attended his funeral because so few realized he was gone.

Okay...I have gotten so far off track with this rant that I actually feel cleansed.

Every good writing teacher preaches the importance of "winding things up" at the conclusion of any composition. Let me "wind this up" by giving you a hug. A real one. I am wrapping my arms around you right now and I am even patting you on the head to let you know that this is not MS related. Let the MS Hug remain internal. I have no desire to mess around with your internal organs.
I just want to let you know that I am here. I hear you. I understand you. I want to help you...while helping me.

During this month of MS Awareness, I am donating one dollar from every sale of my MS-related books to the National MS Society. If you purchase directly from me, this donation will be made at the end of the month. I will personally pay for postage.

If you order on-line, a donation will be made this summer after I receive any royalties that might come my way. I personally prefer the direct purchase method; mainly because that means I have the opportunity meet you.

To date, I have collected nine dollars in sales-related donations and an anonymous contribution. I do not know who sent that generous gift via mail, but please know that I truly appreciate you and that lovely card.

I am even on Pinterest (although I have idea what I am doing there!)
https://www.pinterest.com/lisamccombs/

Jut look for me. I'm not hard to find.
Hugs,
Lisa

Monday, October 28, 2019
We warriors are a resilient breed. After speaking extensively with a CBD enthusiast over the weekend, i finally bit the bullet and bought the "good" stuff...all in the name of research. Things have changed a bit since my first CBD experience, including the flavor. This particular product comes in natural (an earthy flavor), peppermint (self-explanatory), and cinnamon (Yum!).Because particular brand (Hempworx) has ONLY two ingredients : CDB and hemp seed oil.

I decided to document my experience here, so if any of you are interested we can discuss our personal journeys. As you all know, MS is an expensive condition that requires careful thought to additional treatments and related expenditures, most of which are not recognized by insurance companies and/or medical professionals; so, every experience is a financial gamble.

I started my new "treatment" on Saturday, October 26, 2019. The instructions direct you to take two-three drops under the tongue twice a day for th…
5 comments
Read more

After wearing myself out with my petty pink leg, I finally got brave and called Hanger Clinic to inquire about the L300 Walk Aid.

Several years go I was fitted for an older version but when insurance did not recognize the device as a necessary medical item, my  hopes were dashed and I gave up.

On a whim I renewed my interest to discover a newer model called the L300. Where the original device required a shoe insert AND a leg cuff, the L300 is just a cuff. So, of course I figured this would be even MORE expensive. But, I made an aoppointment any way.

The certificated orthopedist clinic owner encouraged me to contact my insurance to inquire again. Guess what? With the medical code he gave me as well as a letter of authorization, insurance will pay 80%! It is still a bit pricey but I think I can wing this!

I just hope this is the route for me. With the assistance of Walk Aid, I can wear regular shoes or even go bare foot!  I know it will r…
Post a comment
Read more